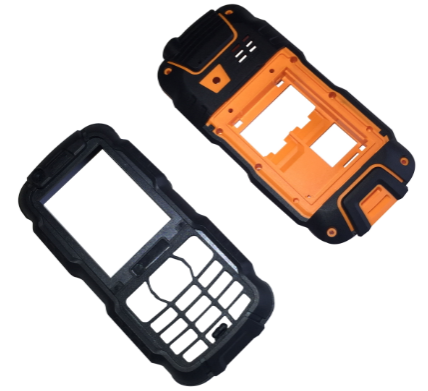 The ‘Two-Shot’ mould consists of two separate cavities that are used for making a single part.

The first step in the process is to create a substrate in the first cavity, which receives material from one of the two injection units.

The tool then opens to allow for a 180° rotation to a secondary position after the finished part is removed from the second stage cavity.

As the tool closes, the second step commences by positioning the previously molded substrate into the second cavity.

The second cavity receives the material from the second injection unit completing a finished part, this occurs simultaneously as the substrate for another part is being molded.

When the tool opens again, the finished part is ejected, and another substrate is ready to receive its over-mold. Therefore by applying alternating rotary motion of the tool, this simultaneous process enables continuous manufacturing operation.

The key benefits of the ‘Two-Shot’ injection moulding are as follows:

3D-MIDs can be constructed with the electronic circuit via 2 shot injection molding. Two shot molded components can have an advantage over Laser Direct Structuring components for higher volume production and when the lines and spaces are greater than .015”.

At Select Connect Technologies we can help with prototyping and ramping up your 2-shot program to production. While we do not mold the parts, we have preferred suppliers who are exceptionally skilled at developing a 2-shot molded component with the proper materials of construction.

The double shot injection molding process uses two different resins where only one of the two resins is platable.

2 shot injection molding can also use alternate materials, such as:

It’s important to have a catalytic difference between the two plastics for a successful 2-shot injection molding application.

The activation step is critical to successful plating of the 2-shot molded component.

Chromic acid, sodium hydroxide, sulfuric acid, and potassium permanganate have all been used to etch the second shot and provide activation sites for electroless deposition without attacking the first shot.

After a chemical neutralization, the 2-shot product needs to be activated and then plated with electroless copper, electroless nickel, and immersion gold (if required).

Wherever the second shot material flows – the plating will follow.

It is not uncommon for the second shot material to be doped with a small amount of palladium to improve the electroless copper deposition reaction that forms the circuit.